Guest
After couple attemps to get car tire on my C10 last week it all came together. I tried first with my stock 16" wheel. I had read where it had been done. The smallest tire I could locate was a 175R16 Maxxis. It will not work! rubs swing arm. Then I found an article from back in 2008. Car tire using a wheel from a 1987 ZL1000 Eliminator. It takes machining of some parts but it all came together. 15" wheel and a 165/80-R-15 tire. I am sure it not for everyone I have couple small rides and 250 miles on it. I like it!! I am sure I will receive lots a negitive feedback on doing this. But I also have a Goldwing and have riden over 50,000 miles on car tires. If I can figure out how to shrink pics down enough I will post a couple here.

Guest
As I understand things, with the new software (and presumably chosen options), us 'forum subscribers' can no longer upload pictures to this site.

Good luck with the wheel and the tire. Does a Goldwing lean as much as a C10?

Member
That was me in 2008.
I was touring in AU and staying with one of the GTR1000 people and Sidecar Don was using the Eliminator 15" wheel. The C10 Concours engine/driveshaft was sourced from the Eliminator so the wheel sildeds right on the rear drive.
No all tires are the exact smae dimension even tho they are sold as a 175 width. I recall a Avon rep was quoted as saying the federal std allows 8% deviation.
I still use the 165R80-15 on my 2003 C12 and have about 100k miles total on four C10's with this mod.
I did use a 175 on the stock wheel. I had to release the air out of the tire to slide it into the swingarm. It was close after airing up but no rubbing. It was a taxi/van/truck tire like for a Vanagon. It seemed to work ok but only put a 1k mi on it during the combined SW/NW rally at Shasta CA.
Full article on my mod in the Summer 2008 Concourier. I believe you have to be a COG member to access the library? 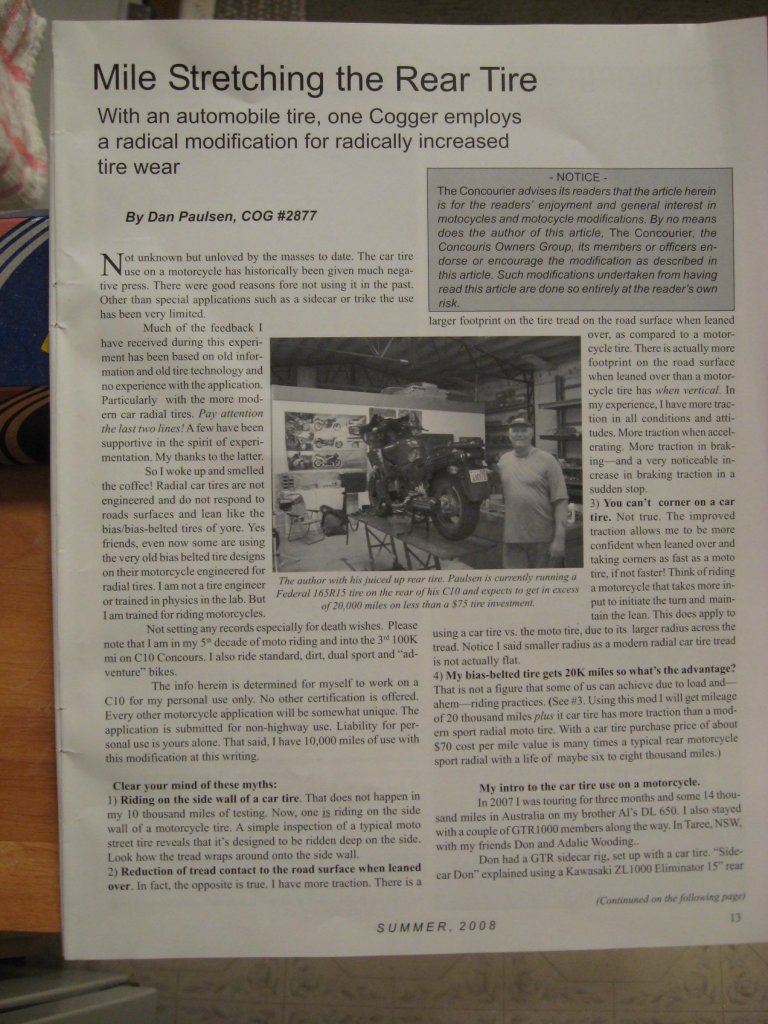 Guest
a thank you to you and your article. I have the 15" wheel on bike. I like it. I now want to change out the Metzler bias tire on the front. I sure that even going to make the bike ride and handle even better.
G

Guest
between honey do jobs and weather have not got to ride very much. But with 1,000 miles on the car tire. My opinion it is GREAT!! bike handles well. I does have the little mind of its own at slow speeds. I'm sure it not for everyone but for me I am happy.
You must log in or register to reply here.
Share:
Facebook Twitter Reddit Pinterest Tumblr WhatsApp Email Share
Top