gbyoung2 said:
Modifying the Unigo hitch to work with my Delkevic pipes continues, but like many projects of this type where fab work is required, they don’t always move as fast as you’d like.

Got the basic frame and mounts for the hitch welded up. Amazing that it’s basically straight. Fab’d the down supports and mounts today and tack welded them in place. We’re happy. Need to transfer the existing hole pattern in the rear pad to the chunk of metal the ball is now mounted on, drill clearance holes, then bend it up approx. 90 deg. so it can be mounted to the rear pad. Will have to re-weld the pad to the frame first because I partially cut it loose so it could be tweaked back into a vertical position. The basic configuration of the hitch changed drastically and the pad just wasn’t useable as a result.

Finish/clean up the welds, hit it with an aggressive bead blasting, then give it a coat of paint. Like to think it’ll be done before the end of the week. 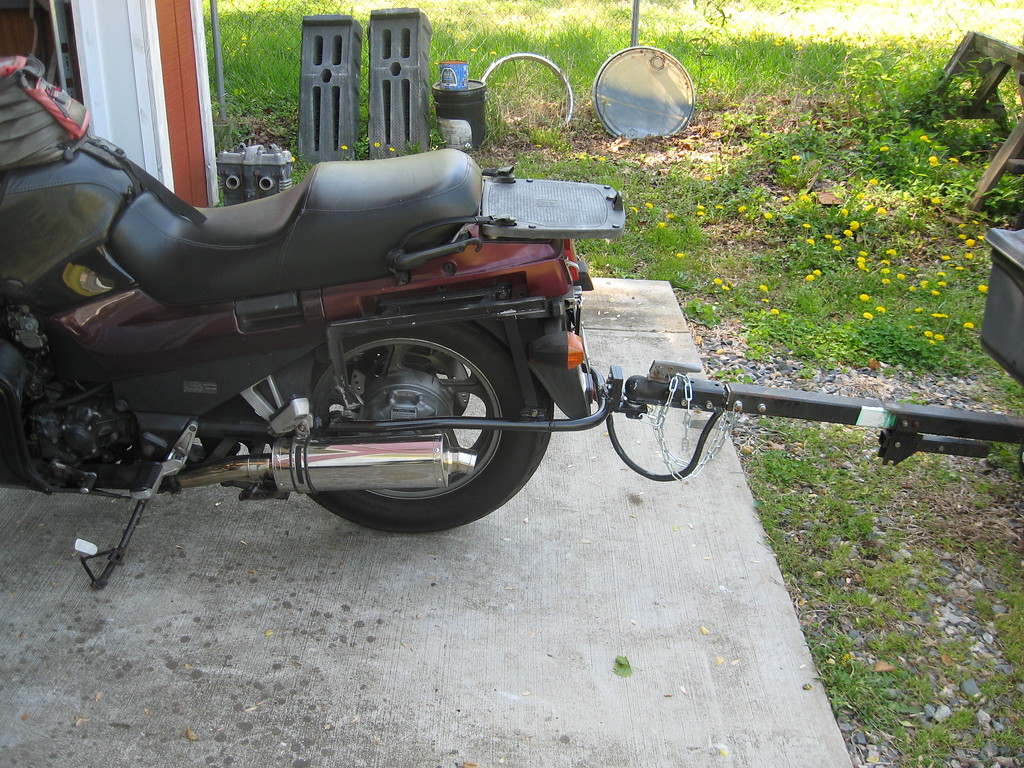 Off to get another load of groceries:

Member
It has been raining for about two weeks in Texas so really not a damn thing. I am planning on installing fairing extenders and back rest when I stop being depressed about the weather.

Member
Loading up and packing for a short trip to Athens Ohio this weekend to do the Ohio's windy 9's as a warm up for the National in June.

Member
Actually made these last night but still want to show them off.

I’d love to make a throttlemeister style throttle lock but not sure exactly how I’d do it.

samuel.p.mars6359 said:
Actually made these last night but still want to show them off.

I’d love to make a throttlemeister style throttle lock but not sure exactly how I’d do it.
Click to expand...

Those look great! Get a go cruise or something similar. It's easier to engage and can be moved from bike to bike.
Look here
C

Member
Got a basket case C-10 awhile back.
Decided to fix and give it to my son.
Finished the re-assembly after a lot of repairs.
Finally able to test ride it last weekend!
It's a keeper, but both tires leaking air at the rims.
arghhhhh

Member
The bike has had a crappy idle issue for quite awhi;e, and it got really bad a day or so ago, so decided to pull the carbs and give them a thorough cleaning. Nothing was really evident, but while they were off I replaced the Dynojet slides with sdjustable needles from my '86 I installed a couple of years ago. Went back to the OEM slides/needles. All the jets were "standard issue,' so left them alone..... other than pulling a thoroughly cleaning after soaking the carbs and blowing all the passages with carb cleaner and compressed air. Set the mixture valves at 2-1/2 turns out.

Pulled the plugs and bead blasted them. Also decided to reinstall the COP arrangement that a fella gave me a couple of years ago. I tried them then, but my Audiovox cruise stopped working. Tried a couple of things to try and remedy the issue, back then, but nothing worked so took the COP setup off and went back to the OEM coils. Figured my long distance riding days are over, so put the COP stuff back on. Also didn't feel like fooling with the throttle cable noose for the cruise that's such a PITA to install and usually result in a rise of my BP reading in the process. A kind soul sent me the rear wheel mag pick up sensor I couldn't find here, so one day whn the weather is really crappy, I may try and get the noose back on the card pull cable and see if I can get the cruise working again with the COP arrangement.

Idle was 95% better, as was a smoother acceleration, so basically happy with the carb work, but think I'll probably tweak the mixture screws out that extra 1/2 turn I put in when they were off. Fortunately, I have a couple of those long-reach 90 deg. screwdrivers so I can access them "fairly" easily.

Decided to make one finaly check since I was in the mood, so pulled the valve cover to check the valves. I usually haven't done this, this soon (~6400 miles). Normal checks were always in the 30,000-40,000 mile range, and that's what they mostly were - checks; no adjustments needed. I set them at the upper limit, and only found one cylinder (#4) whose exhaust valves had loosen up to a slack 0.010" gap. All the other intake and exhaust were still at their respective .007" and .009" settings.

Cover back on, mixture screws back in that 1/2 turn. Those little tweaks seemed to make things better. The louder Delkevic pipes tend to let you hear every little burp and bobble the engine might produce, so some of my "issue" may have had me tilting at windmills to try and achieve perfection.