To Zion and Back Again

Staff member
Member
I left on May 16th and returned on June 6th. In the process I passed through Washington, Oregon, California, Nevada, Utah, Arizona, Colorado, Idaho, and Montana before getting back to the Seattle area. The idea for the trip came about when our oldest daughter asked if I would go hiking with her (and the rest of the Family) in Zion National Park. Even though it meant missing a motorcycle rally in Idaho, I said "Yes!". And it gave me an idea to finish up on some home projects our youngest daughter needed done in her home in Palo Alto, CA. The plan was to go there for a few days, then all the Family would fly into Las Vegas for the night, then travel to St. George, Utah where we'd stay at for a base camp to visit Zion National Park and Bryce Canyon. If it sounds complicated, it was.

BTW, we spent one night in Las Vegas and managed to get tickets to Cirque du Soleil. I can't recommend it enough. I kept repeating myself, saying "Wow" throughout the performance. If you're in town, take your winnings and buy some tickets. You won't be sorry.

I'm a wanna-be geologist, so I find the geologic formations fascinating. Here's a picture in the Virgin River Gorge taken when leaving Las Vegas and heading to St. George. 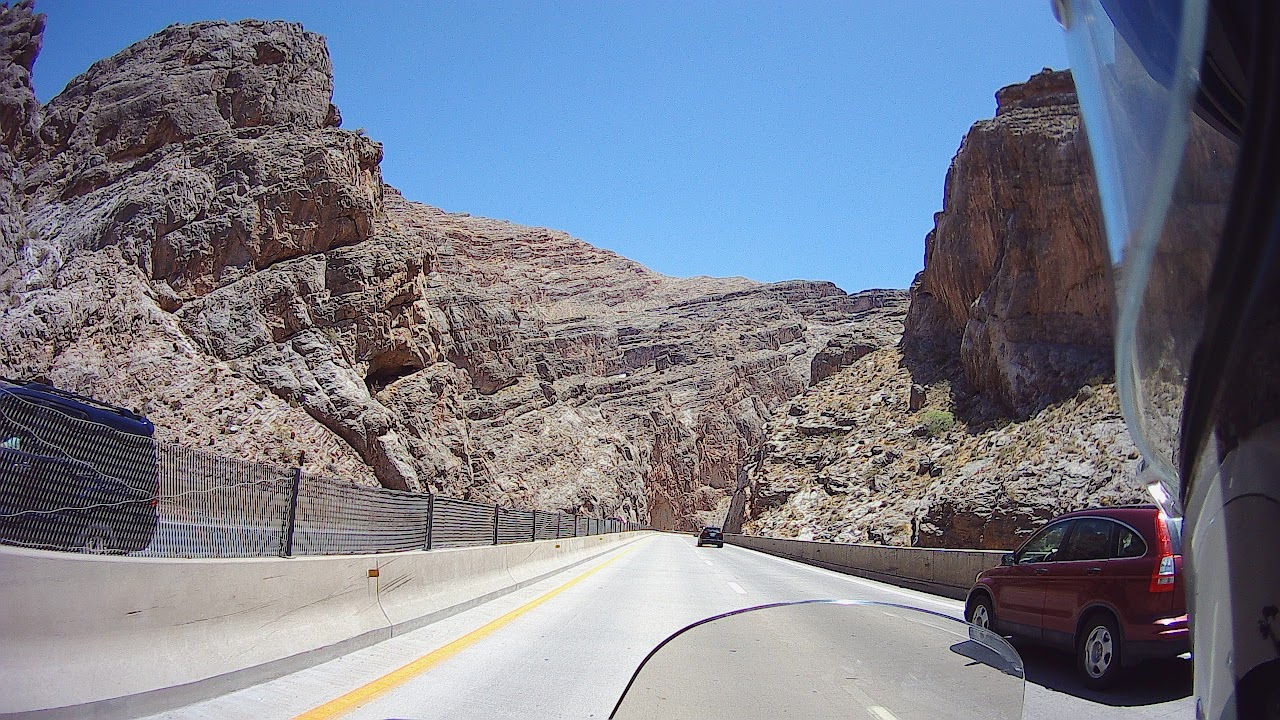 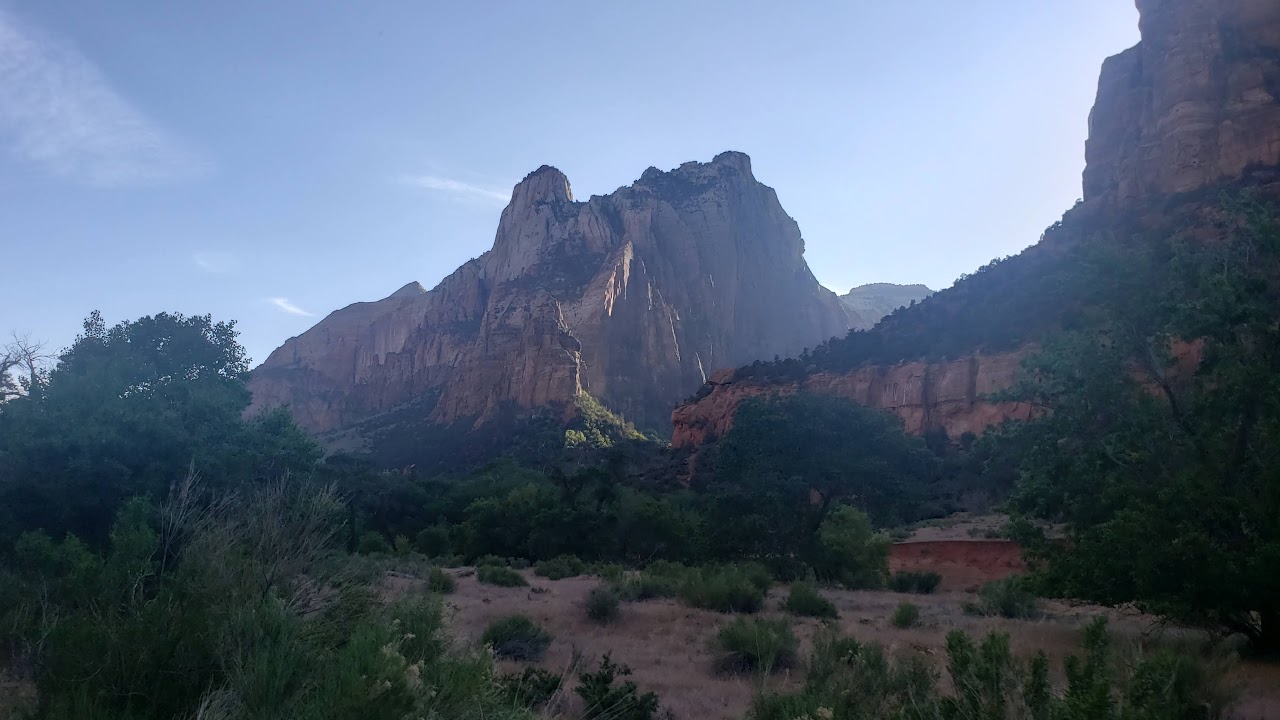 When I passed through this area on my "post-retirement" ride, I only had enough time to walk along the rim. This time, we walked down... 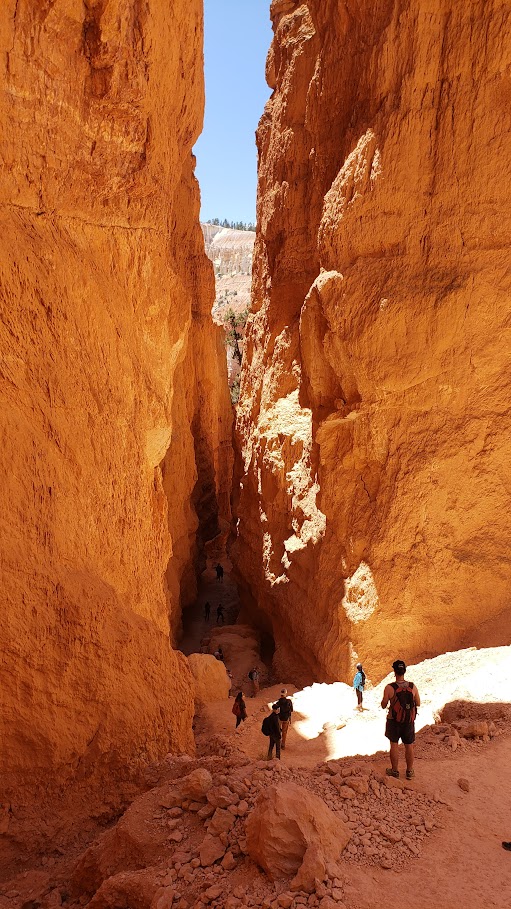 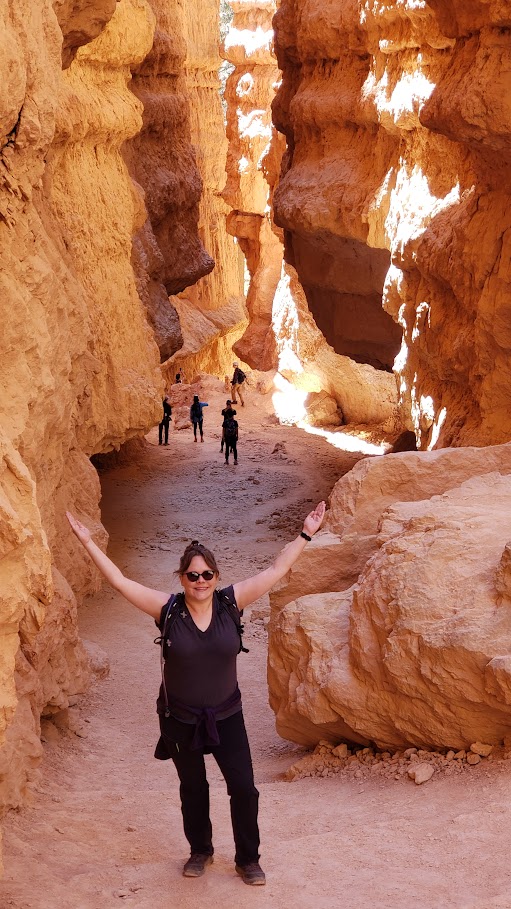 After a week of exploring and sight-seeing, everyone went their separate ways. I headed south to something I've been close to many times, but never seen. The Grand Canyon.

The Grand Canyon is...well, "grand". Pictures don't do it justice. Nor does walking a couple miles into it IMHO. There's just too much to take in. The evening sunset and the morning sunrise are beautiful when the sun lights up the red layers of rock, and the shadows let you really start seeing the details. And then it was time to leave. I passed through the Grand Staircase - Escalante National Monument. The best I can describe it, is beautiful...but a slightly more technical description would say it is slightly larger than the state of Delaware and is a series of plateaus going from Bryce Canyon down to the Grand Canyon. Each plateau is unique and beautiful.

Along the way, you pass through the Glen Canyon Recreation Area. 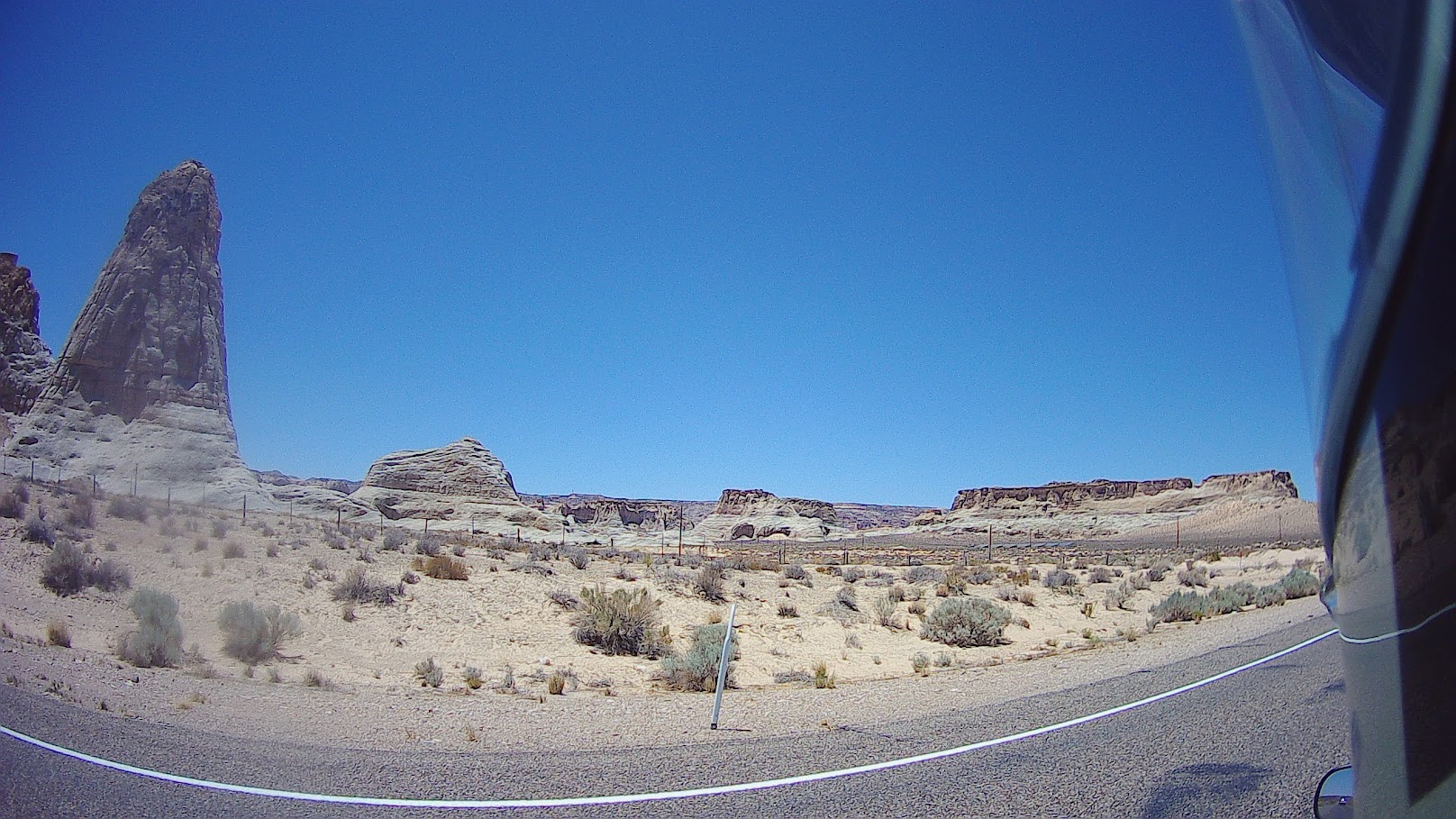 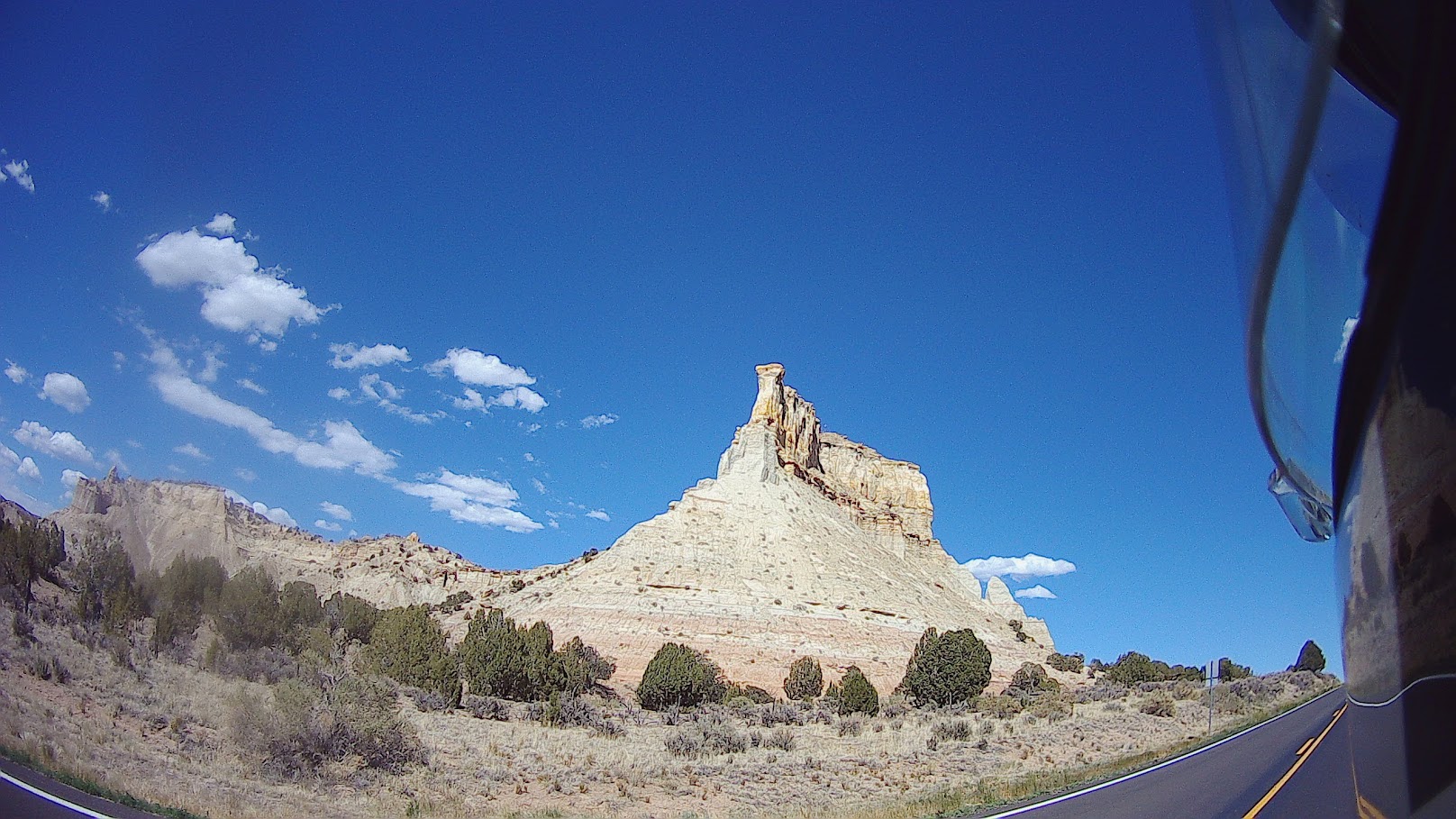 I ended up passing through Capitol Reef National Park. Another place of fascinating geology. And then heading to Arches National Park.

Along the way from Capitol Reef to Arches, is a stretch of road where the rocks turn from red to black and gray. One of the most fascinating rock formations I've ever seen is there. 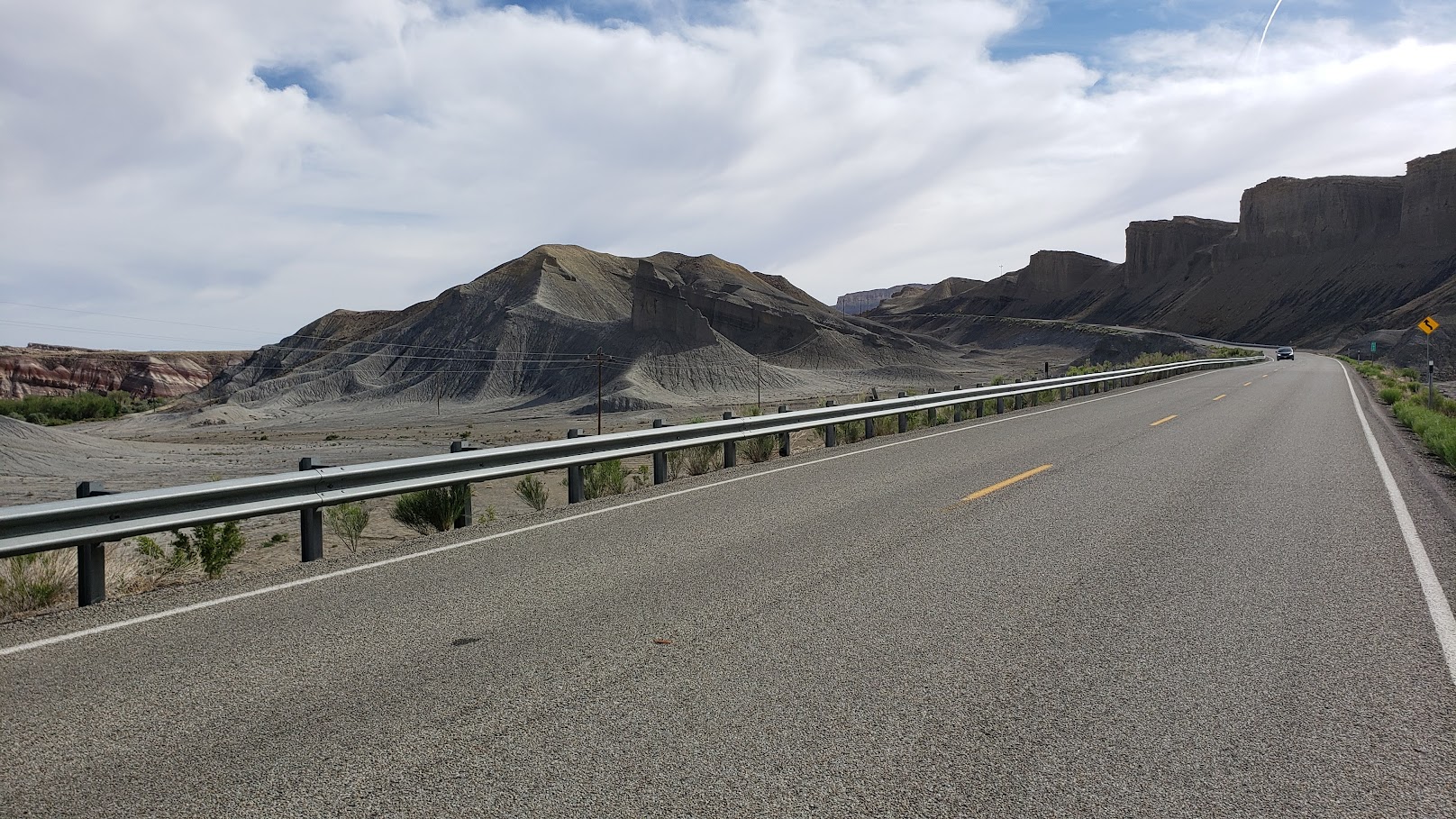 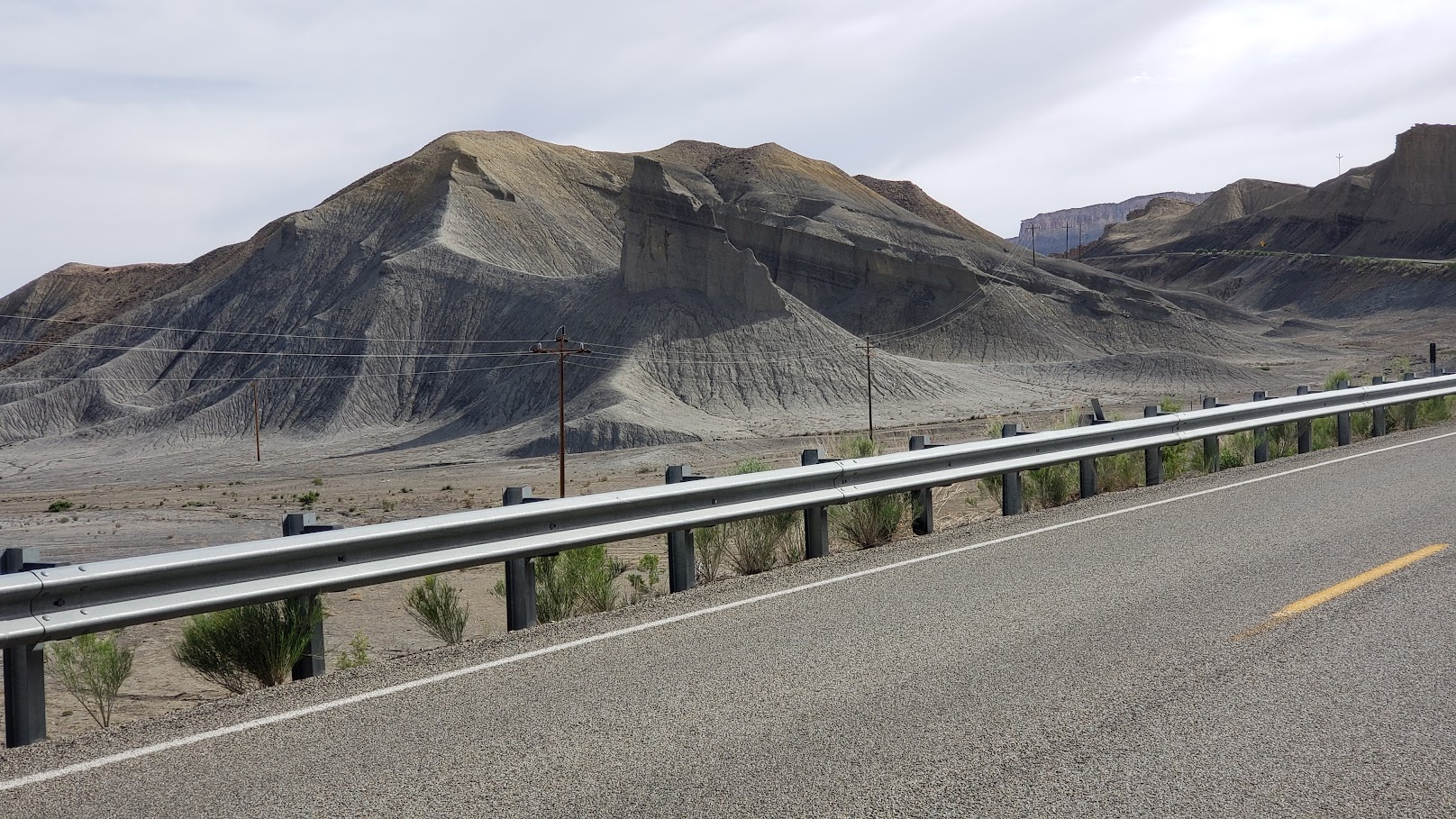 It is like someone had an ice cream sundae and a cookie was stuck in the top of the sundae. There's just this jagged piece of rock sticking up into the air.

And then there's areas like this where one side of the road is light coloured rock, and the other is dark coloured rock. 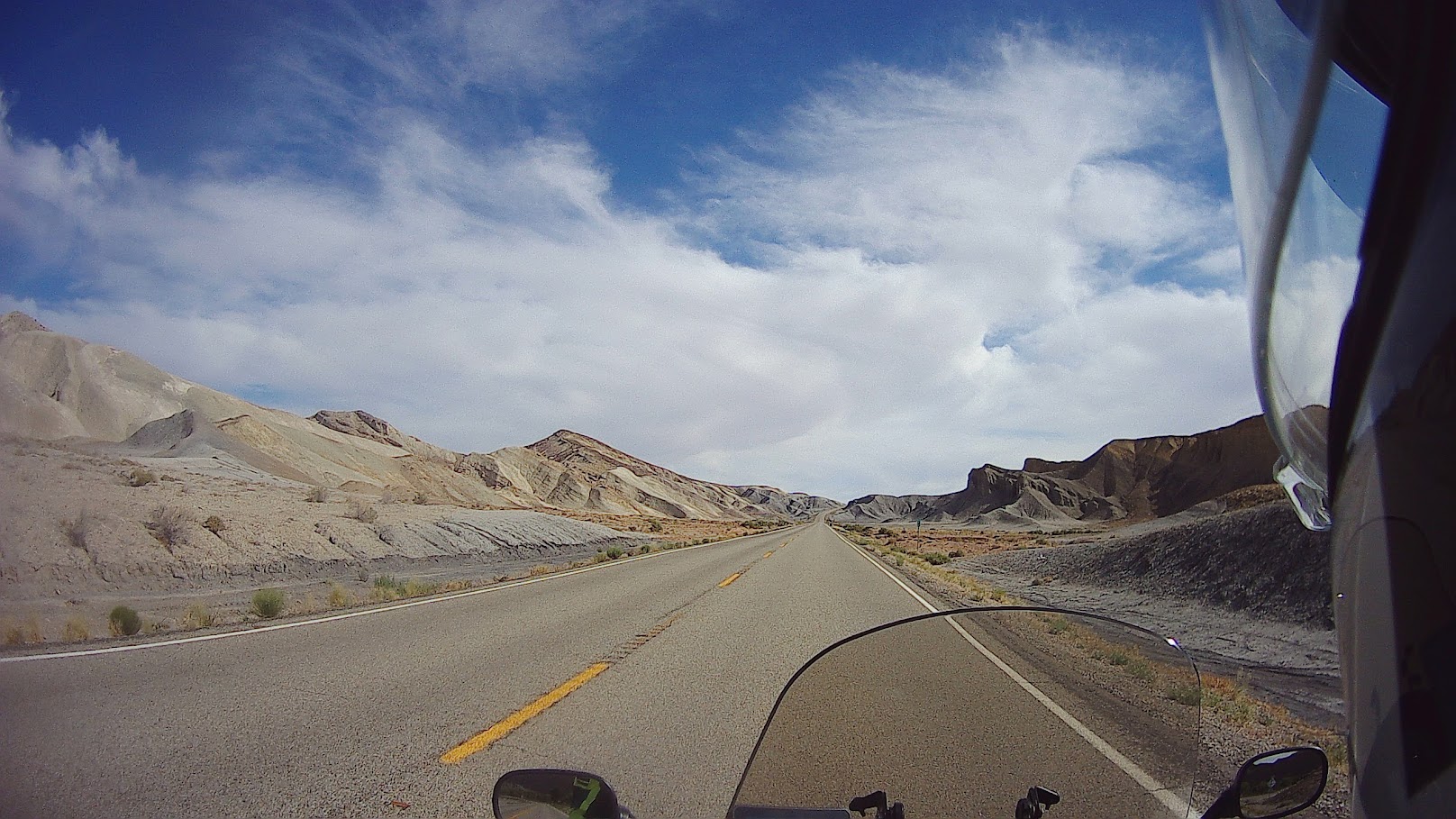 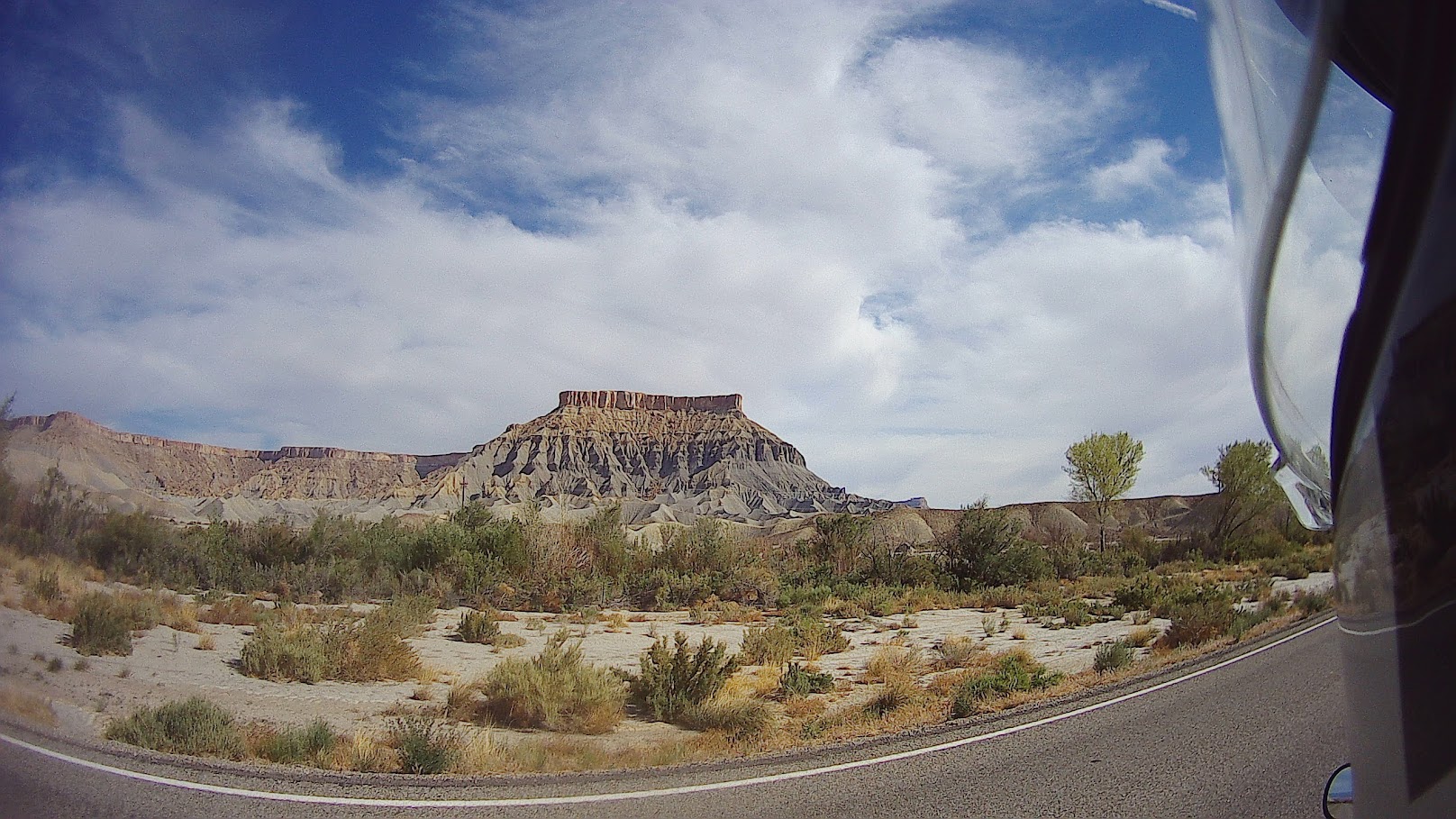 Entrance to Arches has changed. You now need a reservation. Here's where I ate my lunch. 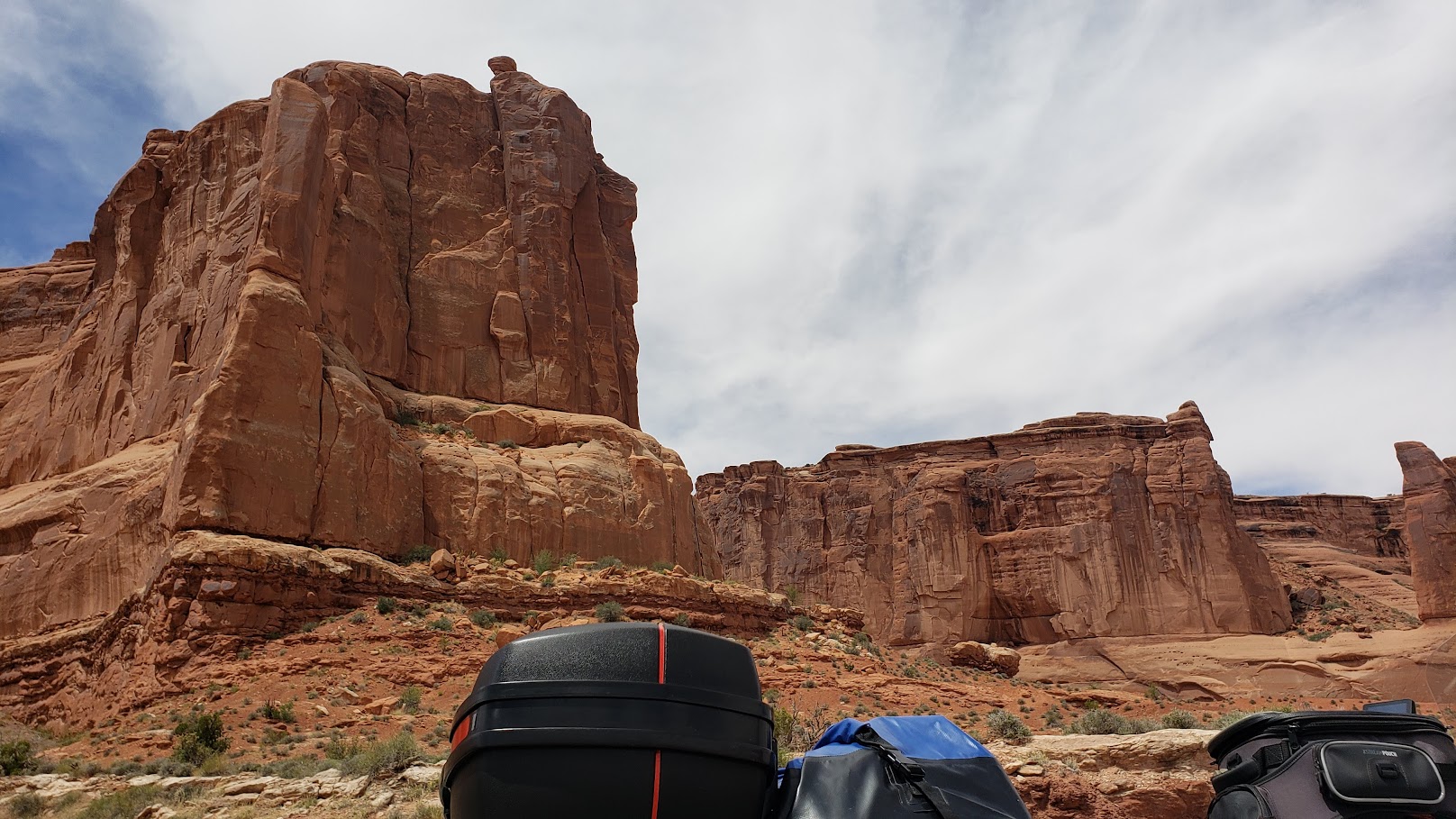 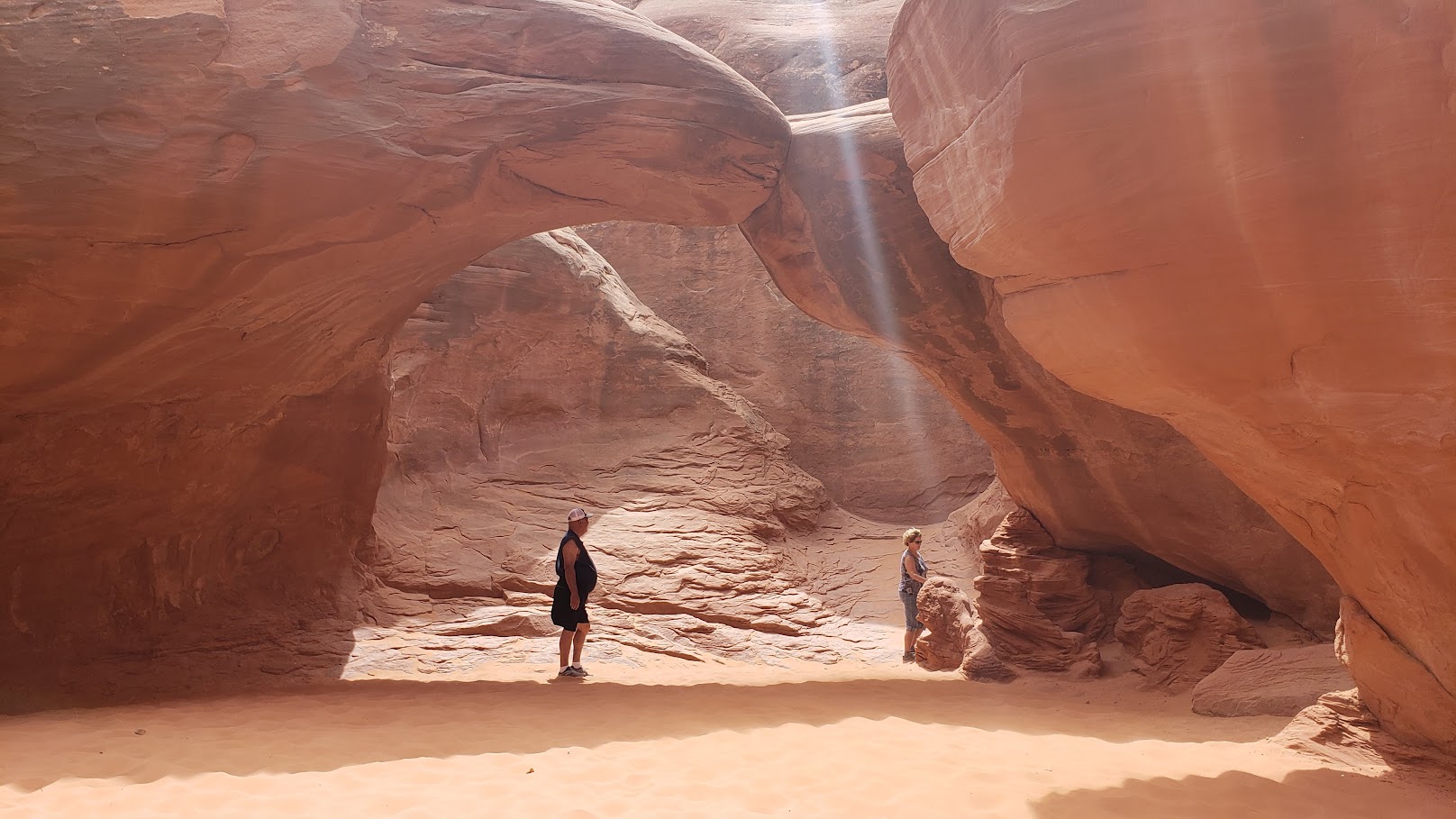 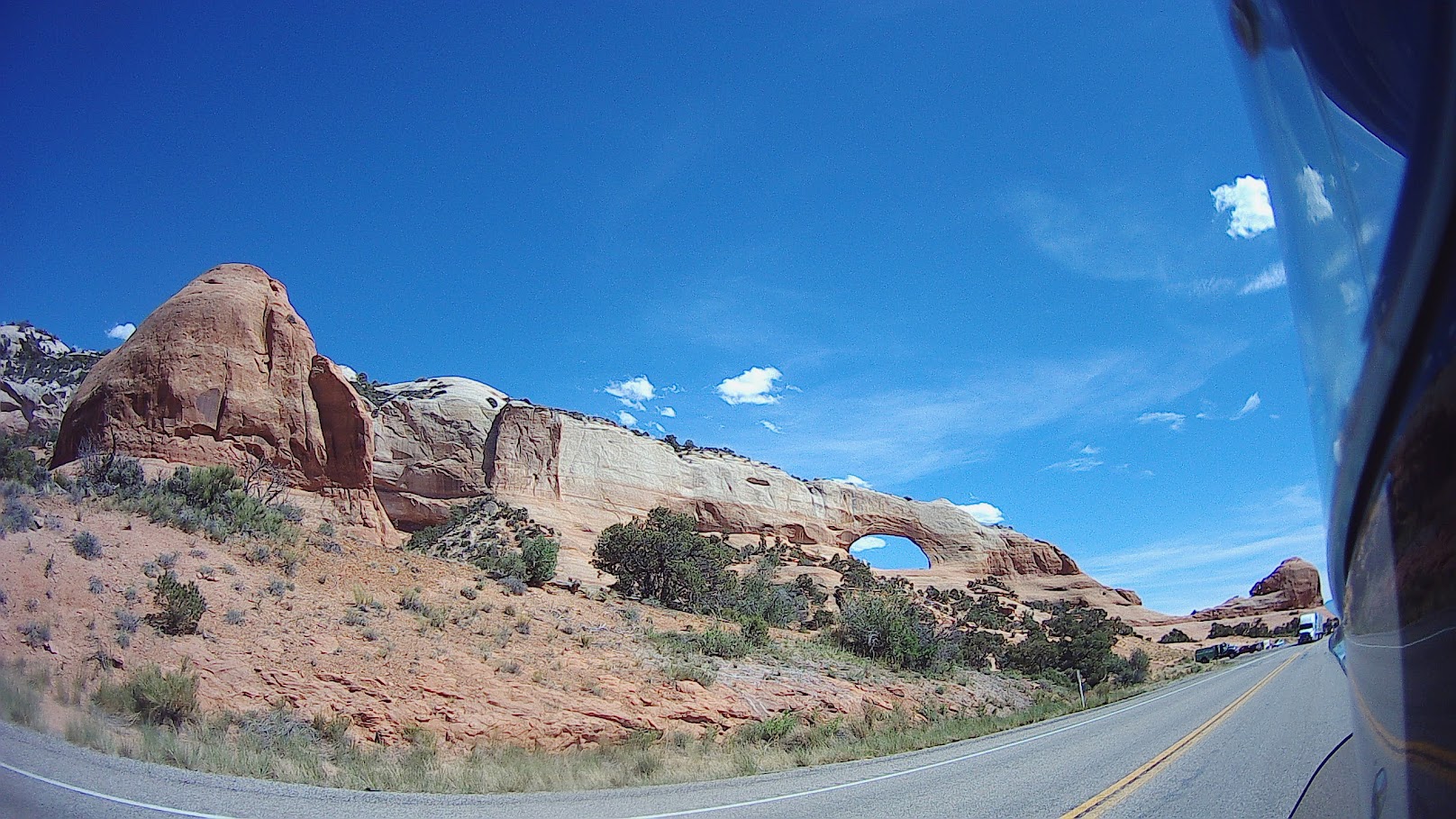 There's a lot more pictures than these, but this will give you a taste of what I experienced. I ended up visiting Zion National Park, Bryce Canyon, Grand Staircase-Escalante, The Hogback, Capitol Reef, Arches and the "Million Dollar" highway in Colorado.

Member
What a great trip, photos and completed on a bike even though meeting up with all your family matters.
F

Member
I want to ride to those places when i retire, better start getting myself in shape for the trip.

Member
Awesome photos. Thanks for sharing.

Member
Fantastic write up and pictures Chris. Missed you at the National this year but what a trip you went on! Terrific! Keith and I on the way back from Arkansas went through many of the areas that you did. Just awesome! Thank you for sharing your adventure!